Download Audio
UK is experiencing a trade upturn amid the Brexit situation, but will that growth persist?

UK is experiencing a trade upturn amid the Brexit situation, but will that growth persist? 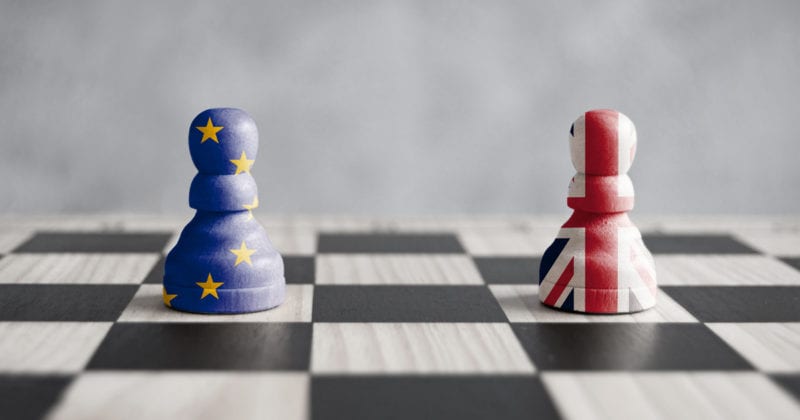 Companies are relocating out of the UK or considering other drastic action ahead of Britain’s imminent exit from the European Union, while others are shutting down its UK manufacturing facilities.

But amid the turmoil, Britain has received some good news: it has experienced a notable trade turnaround and exports have reached a record high.

Just six months ago, the UK had the second-worst result in DHL’s trade growth index, the Global Trade Barometer (GTB). Now it has the best, at a time when global trade growth is slowing.

Meanwhile, British exports continued to trend upwards, reaching a record £639.9 billion in the 2018–19 financial year, according to the UK Office for National Statistics (ONS).

Separate data from the Organization for Economic Co-operation (OECD) showed UK exports grew by 13.8 percent between 2016 and 2018 — faster than Germany, France, and the EU overall.

But will that growth continue?

The country will only narrowly avoid a technical recession in the second two quarters of this financial year, according to the National Institute of Economic and Social Research (NIESR). The Bank of England has also cut its economic growth forecast for the year from 1.5 percent to 1.3 percent.

“The latest ONS data and recent surveys suggest that the economy has lost considerable momentum since the first quarter,” said NIESR economist Janine Boshoff. “This reflects the impact of Brexit-related uncertainty and slower growth in the global economy outside of the U.S.”

The good news, however, is that Britain appears to be weathering the U.S.–China trade war and other global tensions better than most.

According to the GTB, which uses key import and export data to provide an early indicator of the trade growth outlook, the world index is now at 48 points — a 20 percent drop over the past six months. 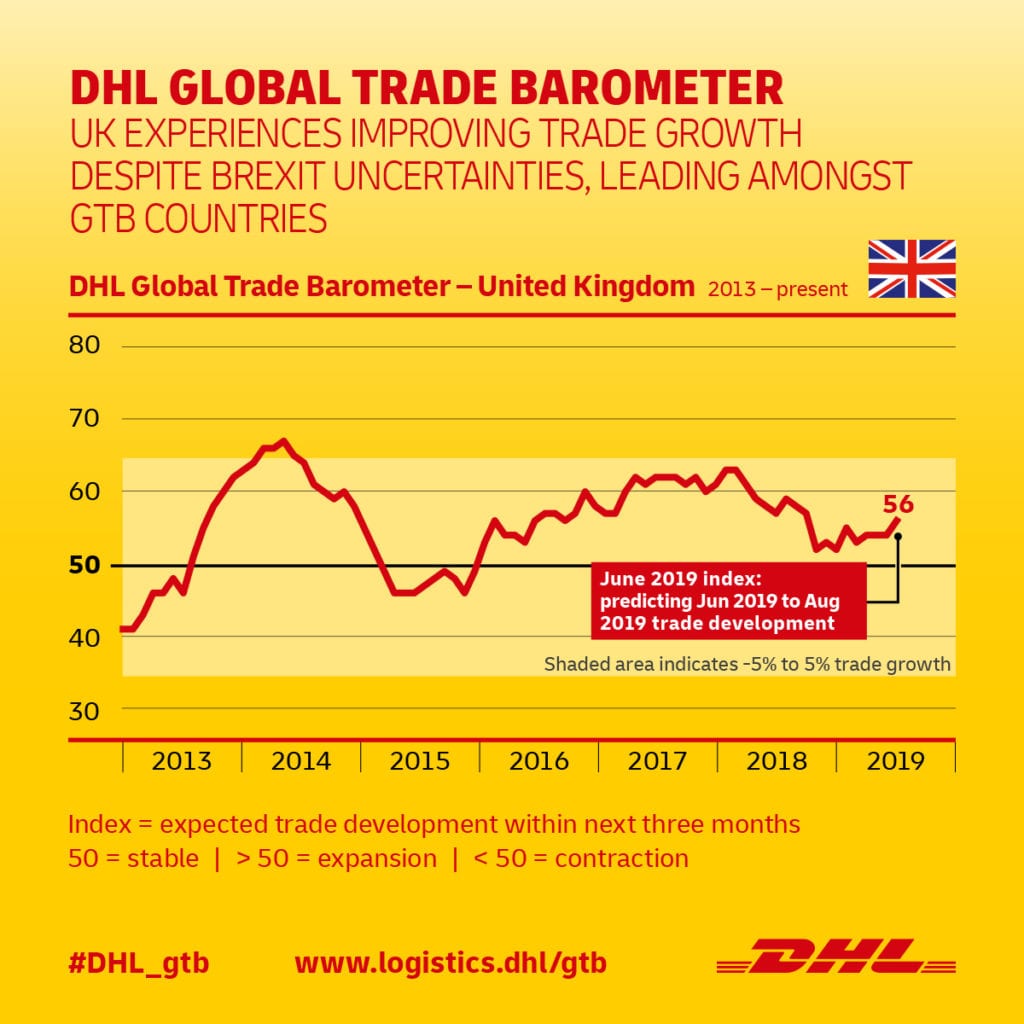 But Britain has bucked that trend. Its index increased by 7 percent to 56 points, indicating a turnaround which suggests that UK has a better trade growth outlook than China, Germany, India, Japan, South Korea, and the U.S.

The barometer attributed a large part of the UK result to a significant rise in air freight imports, including basic raw materials and machinery parts.

Manufacturers stockpiling inventory ahead of Brexit could be one reason for a rise in imports. In its February quarter results, the ONS pointed to manufacturers “changing the timing of their activities” before Brexit.

The manufacturing sector has since contracted following the agreement by the EU and UK government to delay Brexit to October 31, although stockpiling may pick up again before the new deadline.

There is more to the UK’s trade growth than manufacturing imports, however.

Exports have now grown in 38 consecutive months on an annual rolling basis, according to the ONS’ most recent quarterly figures. Fuel sector goods were the main contributors to the latest increase, jumping by 25.9 percent in the previous 12 months. The services sector also increased by 3.3 percent.

Breaking down the positive trade outlook further, the best-performing sectors in the June GTB were consumer fashion goods (up by 69 percent over the previous quarter), and vehicles and parts (up by 50 percent).

The trade outlook for other sectors is not as promising. For example, capital equipment and machinery fell by 26 percent to just 29 points.

The effects of Brexit on these sectors in the long term remains to be seen.

But without a doubt, Brexit will alter UK trade. The important question is exactly how much impact it will have.

After all, the EU is still the UK’s largest trading partner, although ONS figures show that the country is less dependent upon EU trade than it used to be. Exports to the EU, for example, have fallen from 55 percent of all exports in 2006 to 46 percent in 2018.

Much may depend on how the UK exits from the EU.

Under its “main scenario,” where parliament eventually passes a Brexit deal, GDP growth is forecast to remain at 1.3 percent in 2020.

Alternatively, the economy is projected to grow significantly faster under an “upside scenario” (“a smooth Brexit … without too much further delay”), or the economy could contract in early 2020 under a “downside scenario” (a “disorderly Brexit”).

But not everyone agrees that Brexit will be a disaster, even if there is no deal with the EU.

For example, he said, Wetherspoon has already arranged for French and German wine, brandy, and beer to be replaced by alternatives from the UK, Australia, and the U.S.

Meanwhile, vehicle manufacturer O&H believes Brexit will have a “positive impact” on its business, citing a “strong requirement” for its specialist vehicles in the UK.

On the other hand, French carmaker PSA Group has warned that its decision to build its new Vauxhall Astra in Britain is largely dependent on the final negotiated terms of the UK’s exit from the EU.

For many businesses attempting to navigate through these uncertain waters, there are still more questions than answers. What appears certain is that in the face of threats, therein lies myriad opportunities.