Download Audio
With cooperation from its member countries, the landmark agreement could be a turning point for Africa’s underperforming intra-regional trade.

With cooperation from its member countries, the landmark agreement could be a turning point for Africa’s underperforming intra-regional trade.

The ongoing global uncertainty and the lack of regional cooperation have long hindered Africa’s potential from becoming an economic powerhouse.

But with its latest economic game changer coming in the form of a new free trade agreement, the continent looks to be well on track.

After four years of negotiations, the African Continental Free Trade Agreement (AfCFTA) finally came into effect on May 30 this year.

With 54 countries in the bloc — forming a free trade area covering more than a billion people, and with a market size of around US$2.5 trillion (€2.26 trillion) — the AfCFTA is a landmark development.

The agreement aims to create a single market for its member states’ goods and services, facilitate free movement of people and investments, and eventually launch a single-currency union.

These initiatives are fraught with significant challenges, particularly in the light of ongoing trade conflicts between the U.S. and China, but the rewards for the continent will also be substantial.

How Africa stands to gain from AfCFTA

One key benefit of the AfCFTA is the reduction of tariffs on 90 percent of goods traded across the continent. The UN Economic Commission for Africa (UNECA) estimated that such a move could increase intra-African trade by 52 percent in less than five years.

The continent has some catching up to do in this respect: intra-African exports made up only 17 percent of total trade in 2017, compared to 59 percent and 69 percent for intra-Asia and intra-Europe trade respectively.

For African-owned companies, the agreement will make new markets more accessible within the region. Tapping on the AfCFTA can help companies grow their customer base and diversify, both by export destination and the type of goods produced.

Reduced input costs will be another significant advantage. The AfCFTA will make it easier for companies to import raw materials from other resource-rich countries within Africa. It will also ease the process of setting up assembly firms in other countries to access cheaper means of production, and thus improve their bottom lines.

In the long term, the AfCFTA is also expected to boost economic growth across the continent. On average, manufacturing represents only about 10 percent of total GDP in Africa currently — well below the figure in other developing regions.

A thriving continental free trade area could give countries an incentive to transform their commodities into manufactured goods, and thus reduce this gap. A more significant manufacturing sector would also lead companies to create more well-paid jobs and help alleviate poverty in Africa.

A cushion against the U.S.–China trade conflict

More broadly, forming a cohesive and uniform pan-African approach to trade could cushion the continent against any negative transitional effects of the trade war between China and the U.S.

In 2018, the value of trade between Africa and China, the continent’s largest trading partner, was worth over US$200 billion. As a way to spread the risks presented by its trade war with the U.S., China expanded its imports from the continent by 65 percent to US$100 billion, up from US$60 billion in 2017. 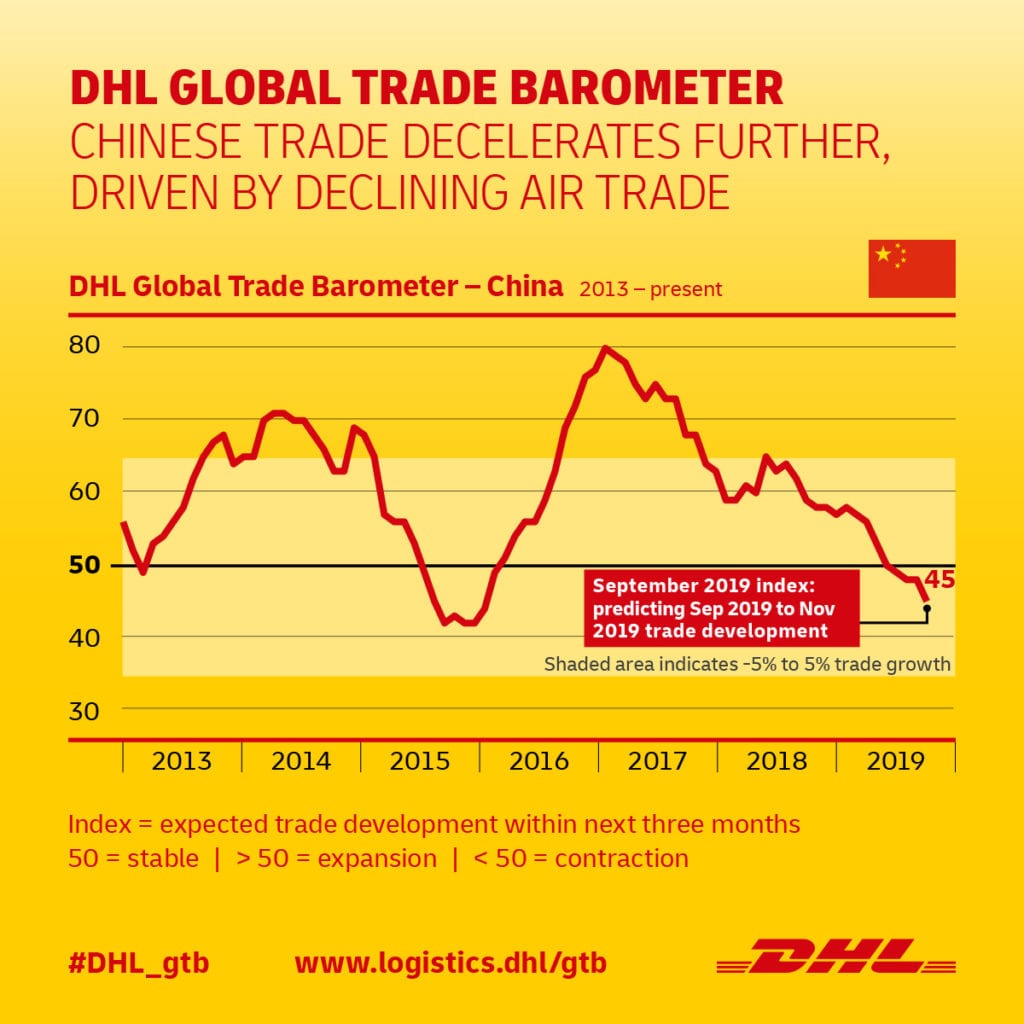 However, the trade war has led to slowing growth in China, which raises the possibility of reduced export opportunities for African companies in the future due to softer demand.

As DHL’s Global Trade Barometer (GTB) indicates, the outlook for China’s trade growth contracted from 49 points in June 2019 to 45 in September. Key sectors also reveal deteriorating trends. Trade in industrial raw materials, for example, fell by 22 points to just 48 over the three months to September, indicating a weakening sector outlook.

The timely ratification of the AfCFTA, which will jump-start intra-African trade, will cushion African exporters against a potential reduction in Chinese demand.

It will also put companies in a stronger position to seize opportunities to fill any exports gap from China to the U.S. Potential beneficiaries include African natural gas producers, particularly Angola’s crude oil producers.

On the other hand, as some commentators have pointed out, harmful trade war fallout for Africa could include China dumping cheap products into domestic African markets, as it looks to consolidate what it has lost in the U.S.

While the AfCFTA offers an ambitious vision of intra-African free trade, implementing it may prove challenging, not least because of the economic disparity that exists among African countries.

“It will be important to address [Africa’s economic] disparities to ensure that special and differential treatments for the least developed countries are adopted and successfully implemented,” said Landry Signe, a fellow at the Brookings Institution’s Africa Growth Initiative.

Hampered by substandard power networks, airline connections, and roads, many less developed economies are ill-equipped to enable trade flows, even if governments tear down tariffs and legal barriers.

Instead, it is the more developed economies, such as South Africa, that are likely to profit most from the agreement. South Africa has a relatively robust infrastructure, for example, and so will able to leverage its air links, ports, and dry docks to attract more investment.

Africa's advanced countries are also at an advantage with their more strongly developed manufacturing capabilities. There is a risk that by allowing them to sell their goods and services to the continent’s less developed countries, the AfCFTA could undercut industrial development in these places.

The AfCFTA can likely still play a game-changing role in Africa’s economic diversification and growth.

For it to work, however, participating countries will need to build an efficient and participatory institutional architecture for it to avoid leaving any poorer economies behind.

At the same time, governments will need to ensure their corporate law systems allow businesses to operate across borders with minimal red tape. Industrial policies will be required — especially those concerning manufacturing — to act as guidelines for productivity, competition, diversification, and economic complexity.

And governments will also need to boost skill levels — an issue that will come to the fore as companies try to build international value chains with a highly trained workforce.

The stakes are high, but already, African countries are starting to strategize on how to benefit from the agreement.

As Monde Muyangwa, Director, Africa program at the Woodrow Wilson International Center, suggests: “If Africa really gets this right, and puts its energies and its forces behind it, this could transform the continent.”