Vietnam rises as a manufacturing star

Download Audio
According to DHL’s Global Connectedness Index 2020, Vietnam ranked 38th out of 169 countries, one place higher than in 2017.

According to DHL’s Global Connectedness Index 2020, Vietnam ranked 38th out of 169 countries, one place higher than in 2017. Vietnam is a fast-rising star in global manufacturing. With China experiencing a fallout from its trade war with the United States, Vietnam has been welcoming manufacturers keen to shift production away from China. It scored its biggest annual flow of foreign direct investment (FDI) in 2019 and gained more attention as an alternative hub when Covid-19 disrupted China’s manufacturing systems and pummeled supply chains.

Vietnam’s resilience to the impacts of the pandemic in 2020 meant it was able to bounce back quickly. Its economy expanded 2.9 percent last year and export value rose 28.4 percent in the first half of 2021 from a year earlier, making it a rare economic success story during the pandemic.

Even as it recently suffered its worst Covid-19 outbreak yet, the country is showing signs of regaining its economic and manufacturing momentum. IHS Markit’s Vietnam Manufacturing Purchasing Managers’ Index (PMI) for October 2021 rebounded to 52.1 in October 2021 after falling to 40.2 the previous month. Even as factories temporarily closed due to lockdowns in mid-2021, total merchandise exports went up 21.8 percent for the first eight months of 2021 compared to a year ago.

“Despite near-term risks, over the medium-term economic outlook, a large number of positive growth drivers are creating favorable tailwinds and will continue to underpin the rapid growth of Vietnam’s economy,” says Rajiv Biswas, IHS Markit’s Executive Director and Asia-Pacific Chief Economist. “This is expected to drive strong growth in Vietnam’s total GDP as well as per capita GDP.”

Cyn-Young Park, Director for Regional Cooperation and Integration at the Asian Development Bank, agrees. “Even as investors may delay their decisions due to the current Covid-19 situation, Vietnam will continue to be a strong regional destination for investment, given the likely changes in the region’s value chain structures and the implementation of the RCEP (Regional Comprehensive Economic Partnership),” she says. 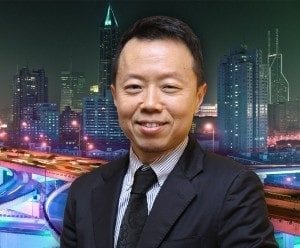 Changes in Asia’s value chain include China’s shift away from low-cost production to products of higher value, such as robots and advanced semiconductors. This transition has driven up manufacturing wages, making production hubs with lower labor costs and young workforces like Vietnam more attractive.

Vietnam’s proximity to China and location along regional shipping routes play to its advantage – so does its strong international connectedness. According to DHL’s Global Connectedness Index 2020, Vietnam ranked 38th out of 169 countries, one place higher than in 2017.

The country has shown a marked improvement, similar to neighboring countries such as Cambodia, Malaysia and Singapore. Reforms to open up the economy over the past few decades have pushed Vietnam’s GDP per capita of roughly $500 (in 2019 U.S. dollars) in 1985 to its current status as a middle-income country with a GDP per capita of $2,715.

Such policies to boost international trade flows have also placed Vietnam high up on the Trade pillar of the Global Connectedness Index. By 2019, the country had entered into trade agreements with countries that account for 67 percent of the rest of the world economy.

“A country must have large international trade flows relative to the size of its domestic economy, and international flows must be distributed across the world for it to be considered globally connected,” said Bernardo Bautista, Managing Director and Country Manager, DHL Express Vietnam. 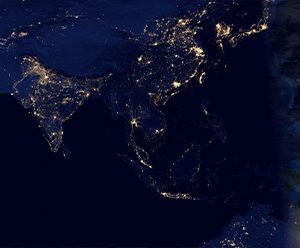 The State of Globalization in… Asia Pacific
Take a closer look at how the Asia Pacific region performed in the latest DHL Global Connectedness Index.
Read more

To add on, Vietnam has also signed the Regional Comprehensive Economic Partnership agreement, which will extend the reach of its trade agreements to include almost all major economies worldwide when it goes into force on 1 January 2022. “This puts Vietnam in a position to be a strong trade and manufacturing hub for the world economy,” adds Bautista. “We remain optimistic about Vietnam’s economic growth and will continuously invest in our network and our services in the country. Besides a new dedicated flight between Ho Chi Minh City and Hong Kong earlier this year, recently we have also introduced additional freighters to support businesses in Vietnam who want to tap into the global market.”

On the manufacturing front, Vietnam has a pipeline of investment from companies looking to diversify production away from China and ease disruptions to their supply chains. Apple supplier Foxconn recently received approval to build a US$270 million (€228 million) plant in the province of Bac Giang. According to the Vietnamese government, Foxconn has so far invested US$1.5 billion in Vietnam and plans to bring in a total of US$700 million this year.

Then there is Samsung, one of the early major investors in Vietnam. From initially investing US$670 million to build a mobile phone production plant in 2008, the manufacturing giant has grown into Vietnam’s biggest source of FDI with a total investment of US$17.3 billion. 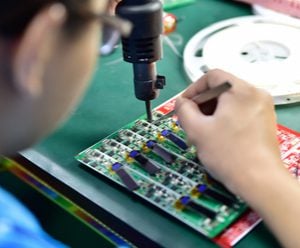 ‘Chipageddon’: How Taiwan is battling the global chip shortage
Semiconductors are the lifeblood of the modern world, but now there is a critical shortage worldwide and Taiwan is at the center of it.
Read more

On the road to recovery

Looking ahead, a rebound in world trade is expected to lift Vietnam’s export manufacturing sector.

“Indeed, as coronavirus-related restrictions are rolled back and vaccines become more widely available, we forecast world trade in real terms will surge nearly 10 percent this year,” says Sian Fenner, Lead Asia Economist at Oxford Economics. “We believe Vietnam will benefit from (the) rise in global demand for electronics because its participation in global supply chains has increased significantly over the past five years following a surge in FDI.”

Vietnam is also expected to continue to gain substantially from manufacturers’ diversification away from China, attracting more investment to produce capital-intensive consumer goods.

“Vietnam’s role in global supply chains has grown as it has absorbed a significant portion of labor-intensive goods production from China and also some portion of the electronics supply chain,” write analysts from BofA Global Research. They add that they do not see other Asian economies “fully replicating Vietnam’s role in the long run”.

To support economic recovery, “it’s critical that the government curbs the infections, accelerates the vaccination drive, insulates the major manufacturing production sites from Covid-19, and protects the poor and most vulnerable,” says Park.

The country also needs to accelerate digitalization in key areas of trade, adds Park. “It should improve trade logistics and minimize disruptions through paperless, digital transactions.”