‘Chipageddon’: How Taiwan is battling the global chip shortage

Semiconductors are the lifeblood of the modern world, but now there is a critical shortage worldwide and Taiwan is at the center of it. 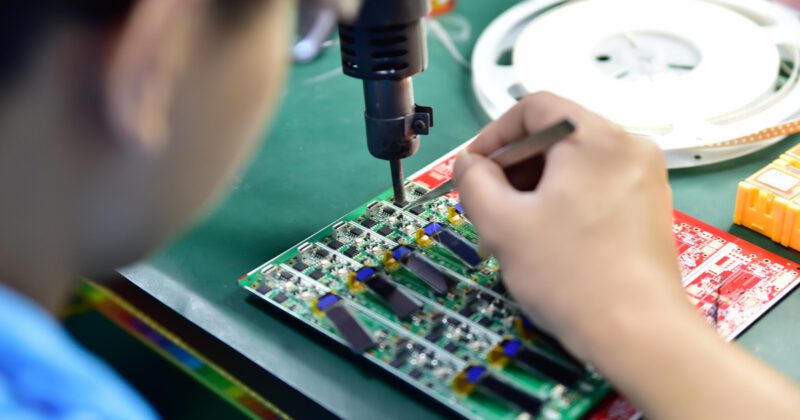 In May, Japanese automobile giant Nissan was forced to put the brakes on its vehicle production and cut its manufacturing output for 2021 by 500,000 units. The reason: a severe shortfall of a coin-sized computer chip needed to power its vehicles.

This chip shortage, which has crippled the global automobile industry for the past 18 months, has now spilled over to other sectors. But effort and flexibility among logistics partners are helping to mitigate the crisis and offer ideas for how processes might be improved in the future.

Chips, also known as semiconductors, power the modern world. Almost anything electronic, from phones, cars to even an alarm clock, relies on these nano-sized silicon wafers to function. Last year, Taiwan dominated the global market share for semiconductor contract manufacturing, accounting for more than 60 percent of global revenue.

“We’re the world’s chipmaking factory. Semiconductor manufacturing is one of the most important industries for Taiwan,” said DJ Shieh, Managing Director of DHL Supply Chain Taiwan.

But in the past year, a global pandemic and one of the worst droughts in half a century has severely disrupted production there. Taiwan is also caught in a global tech war between the United States and China. The triple threat has led to a semiconductor shortage crisis so severe that it has been dubbed “Chipaggedon”.

“We’re doing our best to ensure the seamless flow of goods for our semiconductor customers to minimize the fallout, and hopefully resolve, this supply chain crisis.”

The Covid-19 pandemic was the catalyst for this global shortage — the virus first forced semiconductor factories worldwide to shut down temporarily last year. Since then, it has continued to cause intermittent disruptions. For example, the fresh wave of Covid-19 cases that hit Taiwan in mid-2021 impacted its production capacity of many of its manufacturing firms.

“Some production makers were forced to shut down for two to three days to clean up, disinfect their factories, and conduct Covid-19 testing for its workers,” said Shieh.

In June, King Yuan Electronics, one of the world’s largest chip-testing companies, saw an outbreak of cases that forced a 48-hour suspension of operations. The disruption was estimated to have slashed the company’s production by at least a third for that month.

Although production in most factories has gradually resumed, it is still being hampered by the need for stringent mass testing and quarantine measures. Delays are expected to continue.

This year, Taiwan was also hit with one of its worst droughts in 56 years, an event Shieh described as one of the “biggest concerns” for chip manufacturers.  The calamity posed a huge threat to the chip-making industry, which needs large amounts of water for its production process.

But the situation is likely to ease up. Although the government had to cut water supplies to some chip makers by 15 percent, top-tier manufacturers were less affected.

Mother Nature also provided a timely intervention. “The heavy rains and typhoon that came during the middle of this year also improved the situation,” added Shieh.

Politics, however, has also conspired to create further obstacles. The tech war raging between the U.S. and China has also contributed to an increasingly fragmented global chip supply. Sanctions imposed by the U.S. mean that chipmakers can no longer freely supply their products to any companies, as licenses and government approval are now required.

This has brought uncertainty to the global chip industry as it has led to companies placing double bookings — reservations made to ensure a safety net — which has further exacerbated the shortage.

The impact has been immediate. Chip prices have risen with consumers feeling the pinch. Computers, tablets and even smart televisions have seen prices soar by as much as 30 percent.

Governments are quickly responding by ramping up chip capacity, led by South Korea, U.S. and the European Union. But the new factories will take years to come online.

“To cope with the shortage, companies are removing double bookings and channeling supplies to those who need the chips most. This way, they can filter out some of the customers who just want to do safety bookings,” said Shieh.

Logistics also has a key part to play in ensuring that the chips get to their destination quickly and seamlessly. This will help alleviate any potential delays or chokepoints.

For instance, dealing with the shortage has required flexibility in helping customers cope with the surging demand. “Besides ensuring our quality of service, we also have to be quick to adapt and accommodate to ad-hoc requests, such as providing additional storage space for incoming tools and parts for our customers,” said Shieh.

It is also extending additional services to ensure that supplies are quickly shipped out. DHL deploys material handlers at their customers’ production plants in Taiwan to manage the sensitive tools and machines needed to manufacture these chips. This ensures smooth delivery and functioning of the machines, added Shieh.

The logistics provider also offers cleanrooms and clean benches for cleaning of tools and parts to ensure that the components remain in pristine conditions. Even the smallest speck of dust can destroy an entire chip.

Aware that manpower is a big challenge for the industry, Shieh believes automation and management software solutions will boost the efficiency and speed of current operations, ranging from transport to assembly.

“If we can do more development on our software and improve our transportation management system, it can definitely make us more competitive,” said Shieh, adding that manufacturers can also do more to predict future demand and make better production forecasts.

The global chip shortage is unlikely to be resolved any time soon but any help to ease bottlenecks, speed up delivery, and smoothen deliveries will go a long way to overcoming the difficult situation.

13 1
Thank you for leaving your feedback
Reuse this content
STORIES YOU MAY LIKE
Insights
Can Vietnam ease the semiconductor chip shortage?
Vietnam, previously the site of key supply chain bottlenecks, might offer hope to end the chip shortage in the long run.
Insights
A look back at the trends and new normal of 2021
As we bid farewell to 2021, we look at the trends that have disrupted and evolved the world this past year.
Insights
5 things the current semiconductor slowdown tells us about the global economy
A downturn in the semiconductor industry is never a good sign.
Sustainability
Addressing sustainability in the semiconductor industry
One of the world’s largest providers of testing services for semiconductor wafers is doing its part to minimize its impact on the environment.
Insights
Vietnam rises as a manufacturing star
According to DHL’s Global Connectedness Index 2020, Vietnam ranked 38th out of 169 countries, one place higher than in 2017.
Insights
This Asian economy is emerging as a winner of the trade war
Taiwan’s robust technology industry makes it important to both the United States and China.