A newly inked agreement has opened the doors for frozen, whole Musang King durians from Malaysia to satiate the appetites of durian lovers all around China. 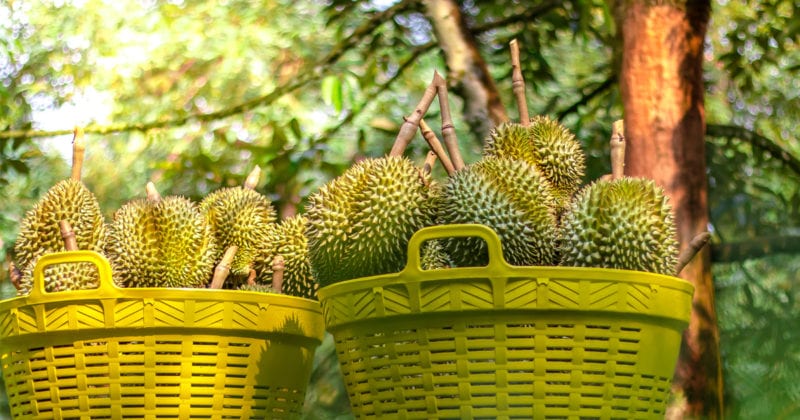 Its pungent aroma and creamy custard flesh have proven divisive for the palates of discerning consumers, but the durian has long cemented its reputation as the king of fruits.

Primarily grown in Southeast Asia’s warmer climate, the thorny fruit has recently made its way to Chinese diners in bizarre forms, as the main ingredient in hotpot broths or atop gourmet pizzas.

Imports for the fruit into China have soared 15 percent since 2017 to about 350,000 tons today, and it seems durian lovers there are hungry for more.

For years, Thailand — the world’s leading durian producer — has dominated China’s imports for the fruit, accounting for roughly 40 percent of the massive market.

But of late, Chinese consumers have been getting a whiff of an alternative to Thai durians: the premium Musang King variety from Malaysia’s sprawling durian plantations.

With demand through the roof, will Malaysia be able to cope with the demand, and at what cost?

Following months of government negotiations, the Chinese customs administration approved the import of frozen whole durians from Malaysia in May this year, just in time to kick off the durian season from June to September.

Though Malaysia has been exporting frozen durian pulp to China since 2011, the new agreement will allow the whole fruit to be shipped to China, where premium durians are rapidly gaining popularity.

Demand has risen so sharply that some have forked out top dollar, up to US$150 (€134), for a frozen, whole Musang King durian from Malaysia.

Last year, the country produced 350 million kilograms of durians, of which only 5 percent was exported overseas.

Many local orchards have started to ramp up its production of durians, a strong sign that they recognize this as a growth opportunity,” said Sim Tze Tzin, Malaysia’s deputy minister for agriculture and agro-based industry.

Support for Malaysian farmers and small businesses has also been steadfast.

“We expect the market for durian exports to grow by 20 percent this year,” said Kenil Vilangappara, Director of Marketing and Sales, DHL Global Forwarding Malaysia.

“With the import ban on whole durians lifted, we foresee a doubling of volumes for fresh durians mainly into Shanghai, Guangzhou, Shenzhen, and Beijing,” Kenil shared.

Aware of the significant growth potential, the Malaysian government is leading the charge for the large-scale farming of durians, in hopes of achieving a 50 percent jump in exports for the fruit by 2030 and boosting the country’s declining agricultural industry.

Dubbed “gold” by the agriculture department, a hectare of Musang King yields nearly nine times more revenue than a hectare of palm plantation.

The lucrative crop has prompted companies in the private sector to cash in on the trend, with some even converting its palm oil estates into durian plantations.

Environmentalists have warned that the practice of deforestation to make way for durian plantations could threaten endangered wildlife species such as the Malayan tiger, and pollute the surrounding environment — the direct result of a “shift from small orchards to industrial-scale operations”.

In Raub, also known as Malaysia’s durian capital, the durian plants — each of which requires eight liters of water daily — have also put a strain on water supply in the district.

When the plantations are eventually up in full swing, the ramifications of growing the durian crops might supersede the damage caused during the palm oil boom, with the environment and the people bearing the brunt of it.

Even under the ideal growing conditions, the increasing volume of durian exports could still be hit with problems during transit that may compromise quality. Having adequate infrastructure is, therefore, necessary to ensure the maximum shelf life of the premium fruit.

“Generally, fresh durians need to be packed in styrofoam cartons with dry ice, which are picked up by refrigerated trucks and then stored temporarily at the airport’s cold room storage,” said Kenil.

Concerns about the distinctive foul smell, often compared to old socks and rotten rubbish, are taken into consideration if the shipment moves on passenger flights where vacuum packing will be required, Kenil added.

As part of DHL Global Forwarding’s quality control measures, the durian shipment must complete its journey from Malaysia to the consignee’s facility in China within a 24-hour window, before it is sold through e-commerce marketplaces and at dining establishments.

The outlook for Malaysia’s durian exports indicates better days are ahead, but adopting efficient and responsible practices will make it an even more fruitful venture.

32 4
Thank you for leaving your feedback
Reuse this content
STORIES YOU MAY LIKE
Insights
Next day delivery of durian could help supercharge Malaysian durian exports
With durian demand remaining high despite the Covid-19 pandemic, exporters find next-day delivery services like DHL’s new Durian Express useful.
Insights
Trade war accelerates shift of production from China
Countries in Southeast Asia have emerged as alternative manufacturing hubs to China as companies seek to avoid hefty U.S. tariffs.
Insights
Ukraine war impacts ocean freight, but limited to European region
Global factors, including further Covid-19 restrictions in China, will continue to put a damper on the supply chain.
Insights
5 sectors feeling the brunt of the U.S.–China trade conflict
As trade friction between the world’s two most powerful economies persists, how are key sectors bearing up?
Insights
Asia’s appetite for fresh Australian produce
A surge in cross-border e-commerce, improved logistics, and bilateral trade agreements are cementing Australia’s status as a leader in fresh food exports.
Insights
Behind the U.S.’ trade dispute with another Asian giant
After China, the United States has doubled down on a trade war with another of its top trading partners: India.