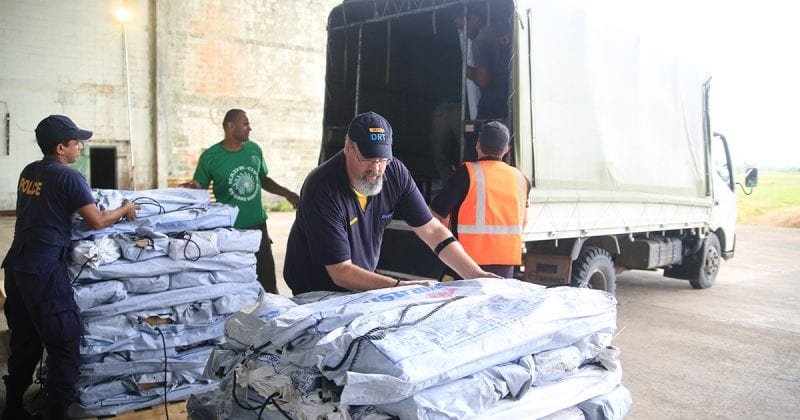 Days after Cyclone Winston struck Fiji in March 2016, Customer Operations Group Manager Rod Freeman and his 19 colleagues from DHL’s Disaster Response Team (DRT) arrived in the disaster zone, already fighting against time as much of Fiji’s population remained without access to clean water, electricity and other essentials.

Aid efforts were hampered by numerous logistics challenges: both international airports had suffered severe flood damage, many roads going to affected townships had been rendered unusable, and many of the worst-hit communities sat on remote islands far from Fiji’s major cities. The DRT knew immediately that they needed to transform the logistics situation, and fast.

“We have a special skillset that enables us to provide assistance to communities in need and help them get back on their feet as quickly as possible,” says Brian Shawcross, Gateway Manager at DHL Express and a DRT member since 2013. “In Fiji, we were able to organize all the relief supplies coming into either Walua Bay or Nasouri Airport; take stock of all the items; and then provide Fiji’s National Disaster Management Office (NDMO) and non-governmental organizations an accurate count of what aid was available and where.”

Made up of over 400 specially-trained DHL volunteers, the DRT program sees its teams coordinate aid relief logistics in disaster zones around the world, including areas of intense humanitarian crisis like post-earthquake Nepal (2015) and the typhoon-ravaged Philippines (2013). In such situations, DRT members typically focus on introducing basic supply chain procedures – like consistent sorting, labeling, and tracking of items like food and tents – to the influx of aid into the country.

“As a first time volunteer, what hit me was the huge impact a team of experienced logistics personnel can make in a very short space of time,” says Freeman. “We instinctively put in place procedures that helped the distribution process run more smoothly and provide visibility to the various (other aid) organizations.”

For the Fiji crisis, the DRT brought together DHL experts in customs clearance, inventory management, and express deliveries, allowing them to improve the flow of aid goods from start to finish. “We were able to ensure the even distribution of aid to towns and villages, and even influence the military to implement best practices for facilitating stock counts and easy stock takes,” says Alan Brackenbury, Customer Service Director at DHL Express. The team even worked with their local colleagues to turn all DHL offices into drop-off points for donations of emergency supplies – ensuring that Fijians’ good intentions wouldn’t go to waste.

“We met the villagers, sat down with them under their shelter tarps, and listened to their stories. Seeing the smiles on the children’s faces, and how resilient the villagers were – it was all such a humbling experience."

“With the aid pouring in, we provided our professional expertise and made it relatively easy for (aid groups) to organize onward distribution,” says Mark Butcher, Head of Security and Operational Resilience South Pacific, DHL Global Forwarding, of the post-Winston experience. “We were efficient and knew exactly what to do under the circumstances – with the DRT, you can really use your professional skillset to add value.”

“We met the villagers, sat down with them under their shelter tarps, and listened to their stories,” says Freeman, recalling his visit to Fiji. “Seeing the smiles on the children’s faces, and how resilient the villagers were – it was all such a humbling experience."

What DRT did to make a difference to the lives of Fijians and other Pacific Islanders still inspires Freeman till today. “It was very rewarding to be a part of the logistical supply chain for food, shelter and medical equipment and then to travel to remote villages to witness these goods being used to help the villagers through an extremely difficult time.”