Download Audio
Domestic transportation is high on the Egyptian government’s agenda, with upcoming rail coach deliveries crucial to their plans. We take an inside look at what makes it all click.

Domestic transportation is high on the Egyptian government’s agenda, with upcoming rail coach deliveries crucial to their plans. We take an inside look at what makes it all click. 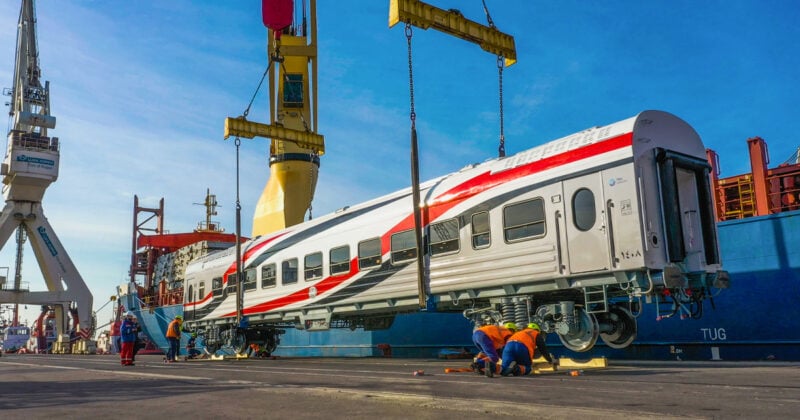 Egypt, one of the Arab region’s largest economies and its most populous country, aims to establish itself as a major transit corridor.

The country also wants to maintain its role as a conduit to Africa, with ships from the Mediterranean using the Suez Canal to reach Eastern Africa and the Gulf countries.

But in recent years, prominent transport bottlenecks have increased the cost of trading and distribution, as well as reduced mobility.

Egypt has been investing in infrastructure projects including roads, rail, and logistics zones to achieve its goal. There has also been a push to improve the domestic rail network to alleviate pressure on the road network.

Egypt’s rail network has a long history. It was first started in 1834, and linked Cairo with the Suez. The first rail line in Egypt, and incidentally in Africa, was opened in 1856, spanning 209 kilometers, spanning Cairo to Alexandria.

According to the World Bank, the network reached 5,195 kilometers in 2014, with 705 stations and 800 locomotives. But its age has been showing, especially with 85 percent of the signals in the system mechanical.

The Egyptian National made plans to improve rail services by acquiring modern energy-efficient rolling stock, with a €126 million loan, granted by the European Bank for Reconstruction and Development.

It has since procured new locomotives and carriages from Hungarian rail carriage manufacturer Dunakeszi Járműjavító Kft, which is owned by TMH International AG and Magyar Vagon Zrt. The company has committed to deliver a total passenger fleet of 678 coaches in the next 32 months, starting from February 10, 2021.

However, the coaches' size presents a particular challenge in ensuring delivery via sea and rail freight. Each coach weighs 48 tons and measures 24.5 meters in length, as well as 4.5 meters in height.

“This project revives the long and proud tradition of rail manufacturing in Hungary and represents the largest-ever order of rolling stock in the country's history," said Terence Watson, Senior Vice President Europe at TMH International and CEO of TMH Hungary.

To aid in the complex transfer of these coaches from the production site in Dunakeszi, Hungary, to Egypt, Dunakeszi Járműjavító Kft is working with DHL Industrial Projects, a unit of DHL Global Forwarding that manages complex project logistics, deep-sea chartering activity, and heavy-lift cargo.

DHL will manage the coaches' end-to-end transport, beginning via rail to the port of Koper, Slovenia, where DHL is integrating the cargo via its charter carriers. From there, DHL will deliver the cargo via sea directly onto the railway network in Egypt at the port of Alexandria.

“The collaboration with Dunakeszi Járműjavító Kft is further testimony to the fact we offer the exact expertise required for this extraordinary transport,” said Magued Ragheb, Country Manager for DHL Global Forwarding Egypt. “I’m incredibly proud of the team in helping us to become a first-choice provider of the delivery of these coaches in a country with longstanding heritage in the field of rolling stock.”

Ragheb elaborated that there is a considerable amount of logistical and technical planning for moves such as this, saying: “Multi-modal operations need to focus on the transition from one Mode of Transport (MOT) to another, and often where a shift of responsible parties and asset owners take place.”

“In the case for this project, the shift of MOT from rail to ocean freight, and then back to rail, was also a large consideration.”

The ability to deliver, not only alongside the vessel on rail, but within reach and capacity of the necessary lifting equipment was crucial, and the same MOT transfer in reverse also had to be managed for in Egypt. This needed the combined expertise of subject matter experts (SMEs) from DHL Industrial Projects.

“DHL’s SME’s allow us to give a much-needed assurance of operations, provide confidence in applied solutions, as well as expert oversight and control during operations such as these”, Ragheb said.

Other variables, such as environmental and third-party factors (such as port congestion), were also carefully assessed and regularly reviewed.

“While all eventualities can’t be accounted for, knowing the likelihood of certain events and influencing factors, with the right pre-planning can overcome or mitigate them to reduce their effect. Intimate knowledge of each part of the operation delivery, and involvement of the appropriate SMEs is crucial to our process,” Ragheb added. 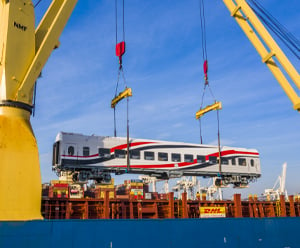