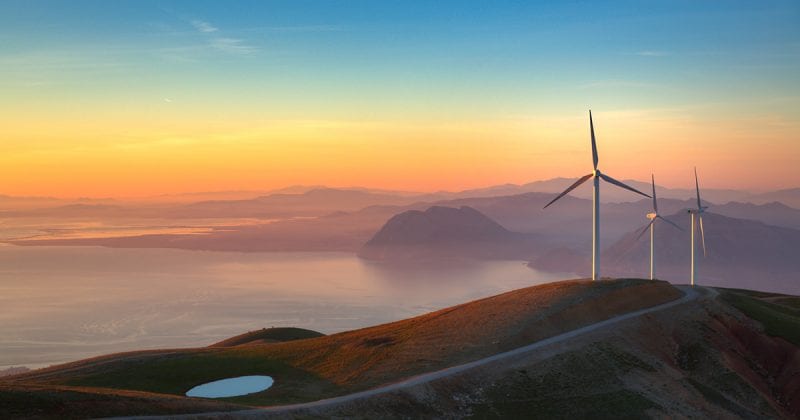 Shipping gigantic wind turbines from factories in China to some of the most remote areas of the world is a herculean effort, but the heavy lifting falls on a relatively tiny – and steadfastly dedicated – group of logistics supervisors led by Even Zhang, who heads DHL’s Regional Wind Competence Center in Shanghai.

Zhang’s job is simple: turn promising logisticians into wind-power experts familiar with the intricacies of the huge blades and parts that make up the turbines dotting coastlines and hills around the world. Also vital to the whole process of transporting wind turbines is the cooperation with parties involved, from the port captains and shippers to the truck drivers and custom officials.

“You have to handle the entire process from start to finish – it’s the only way to make sure that everything is done right,” says Zhang. Despite the complexity of the task, it sometimes takes as few as three people to oversee the process, she adds.

The stakes, like the turbines themselves, are high. Demand for wind power continues to grow at a steady clip, with global capacity increasing by 16% between 2015 and 2016 – the “low point” of a recent trough in demand due to plunging oil prices, according to Zhang. Wind’s share of market is growing in countries from Argentina to Sweden, often for reasons far more pressing than eco-friendly credentials: Brazil, for example, sees wind as an escape route from its dominant hydroelectric sources that often fail during times of drought. And in China – one of the new powerhouses of wind energy, home to half the world’s top 10 wind turbine manufacturers – production capacity for wind farms is double that of planned domestic construction, putting renewed pressure on manufacturers to sell their turbines overseas.

“Wind is hot right now,” says Zhang. “It used to be oil and gas (for us), but now it’s turbines. They’re clean and they’ve got a good image worldwide. But shipping them is quite complicated stuff.”

In high demand – and hard to carry

Unlike other forms of energy infrastructure – many of which DHL also transports through its Industrial Projects division – wind turbines don’t take as long to install. “It’s a pretty fast process,” says Mathias Steck. “If you build a coal or nuclear power plant, it takes you lots of time, and creates numerous externalities which often go unrecognized until after completion. Wind is plug-and-play.”

As the Asia Pacific Regional Manager of Energy and Renewables for global sustainability consultancy DNV GL, Steck sees demand for renewables, particularly wind and solar, on the up-and-up in Asia for several reasons. “All of the South-East Asian countries face pressure to decarbonize and do something against climate disruption because of rising water levels,” says Steck. “Both China and India have very aggressive targets for wind, as well as solar. The political sentiment there, as well as in countries like Australia and Taiwan, is going in the right direction.”

“The abundance of technology available also helps: it’s affordable and it’s getting into commodity territory. Wind is still a complicated matter, but there is a lot of maturity in the market now.”

If you build a coal or nuclear power plant, it takes you lots of time, and creates numerous externalities which often go unrecognized until after completion. Wind is plug-and-play.

Complicated may be an understatement. The bulky, fragile nature of turbine parts makes transportation a fraught process for even experienced handlers. Anything can disrupt the freight schedule, from overzealous authorities to accidents on the road – forcing the wind turbines’ supervisors to think fast, and act faster.

“At one time, we were shipping turbines to Australia – the towers came from one city, and the blades from another,” recalls Zhang. “We had split the shipment into two phases, and Phase 1 went smoothly…but during Phase 2, the port authorities told us that the blades were stacked too high and didn’t allow our vessel to leave. We had to unload the vessel and quickly find another ship to take just four sets of blades.”

Incidents like these feed back into DHL’s three Wind Competence Centers, helping supervisors-in-training to prepare for any number of situations that may arise along a turbine’s journey. At the Centers, logistics operators also learn how to make sense of the different handling manuals used by each customer for quality assurance, navigate the requirements of suppliers, and audit third-party vendors on compliance and freight capacity. The more forewarning of potential issues a supervisor has, the more likely the turbine ends up getting built on time and to specification.

“Sometimes the cranes that we use for loading the towers into the vessels aren’t long enough, or can’t take the weight – so you need to adjust them on the fly or quickly get them to a new port,” says Zhang. “During the busy season at the ports, we need to be very careful about other trailers and cargo which might hit the turbines: we often ask the port to set aside an area for the cargo so that it’s not impacted by others. Once, one blade ended up getting scratched because a small car hit it on the road! Nowadays, we ask manufacturers to provide us with paint so we can touch-up issues like this on the go. It’s up to our supervisors to stay on top of these issues and stick to schedule.”

The challenges don’t stop once the wind turbines reach their destination either. “For servicing, you need a bunch of engineers, service cars full of tools and spare parts and at some wind farms, you store the spare parts at the farm itself,” says Steck, recalling one incident where a sudden port closure made shipping in spare parts incredibly difficult – and almost sent an entire wind farm offline. “But it’s interesting to see how manufacturers handle this. Some of them can bring in parts in almost no time – you create this perception that the turbines never actually break, because even if a rotor does fail, they can get the new one on the turbine a couple of days later.”

It’s easy to go wrong when people don’t get the operations or the customer demands…we accumulated this expertise over a long time, and we don’t want to let it go.

The price of hot air

In fact, the pressure is on manufacturers and their freight forwarders to move turbines faster and cheaper than ever before. “The cost advantage of producing cheap turbines in China – it’s reduced quite significantly by these long shipping cycles,” says Steck. “Plus, when wind turbine manufacturers in Europe and China react to price pressure, they can end up with a competitive disadvantage when they ship.”

“I think we may see a return to more local production for wind power, especially as the numbers rise. I mean, imagine if you have a couple of thousand turbines running in the US – you cannot ship your spare parts from China on-demand. Maybe you can still manufacture them there and bring them over. But local production also makes sense because you build up local knowledge of the technology, which helps solve the issues of servicing and maintenance as well.”

The other option is to do more with less. DHL’s Wind Competence Centers have turned their sights on optimizing vessel loads – fitting more of the notoriously unwieldy blades, nacelles (casings), and tower components onto each ship than ever before. Special-purpose vessels for wind turbine transportation have multiplied amongst freighters’ fleets, though in China many operators still use repurposed oil and gas installation ships. “The situation has improved vastly,” says Zhang. “Before, carriers didn’t understand the loads so well – they could only fit four or five blades on each vessel.” 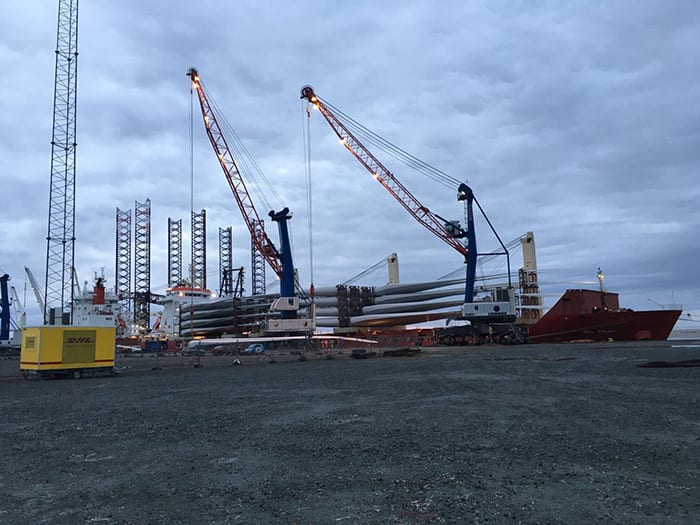 “Now, they know how to perform the loading and unloading operations smoothly, they have more new vessels to improve loads. That’s why the price is getting better and better.”

Short-term volatility aside, Steck sees no sign of demand for wind power tapering off, especially in Asia Pacific. “Asia Pacific offers many opportunities for smart renewable energy deployment,” Steck says. “In areas which are not electrified yet, one could do clever stuff right from the start, like renewable-powered micro-grids for individual villages, which can later be combined to mesogrids (networks of power grids) connecting the different villages. China is mulling over whether to build offshore wind, or set up turbines in the Gobi Desert and use Ultra-High-Voltage DC to transport electricity across the entire country.”

“This region is really going to be very central for renewables like wind - especially since the costs are coming down to extremely competitive levels.”

Powering that energy revolution will be a growing number of shipping vessels, trucks, and specialists dedicated to the wind turbines’ safe passage. “We set up this team not only because of demand, but because it’s special,” says Zhang. “It’s easy to go wrong when people don’t get the operations or the customer demands – things like transit time, handling manuals and technical instructions.”

“It’s very important for our customers that we make sure everyone at DHL understands the intricacies of wind turbines. We accumulated this expertise over a long time, and we don’t want to let it go.”

2 0
Thank you for leaving your feedback
Reuse this content
STORIES YOU MAY LIKE
Insights
Rising export levels inspire cautious optimism
Despite continuing risks, there are some positive signs for ocean shipping stakeholders.
Insights
Before the storm: Mitigating the impact of disasters
The impact of extreme weather events on supply chains can be minimized with the right measures in place.
Innovation
Saving lives, one drone delivery at a time
Drones have been revolutionizing the delivery of medicines, quietly transforming the lives of residents in rural communities around the world.
Sustainability
5 reasons why hydrogen is the fuel of the future
With global warming and carbon emissions dominating headlines, countries are turning to hydrogen as a secure and clean alternative to fossil fuels.
Insights
Anothersole: Helping customers put their best foot forward
Anothersole now has six stores throughout the world, and its biggest markets include the United States, Hong Kong, and Australia.
Insights
A greener future for ocean freight
It is time to answer the call to reduce greenhouse gas emissions and pave the way for cleaner, more sustainable sea-freight solutions.