Shooting pods at speeds of more than 1,000 kilometers per hour underground with goods on board may sound like science fiction, but the Hyperloop vision is fast becoming reality. 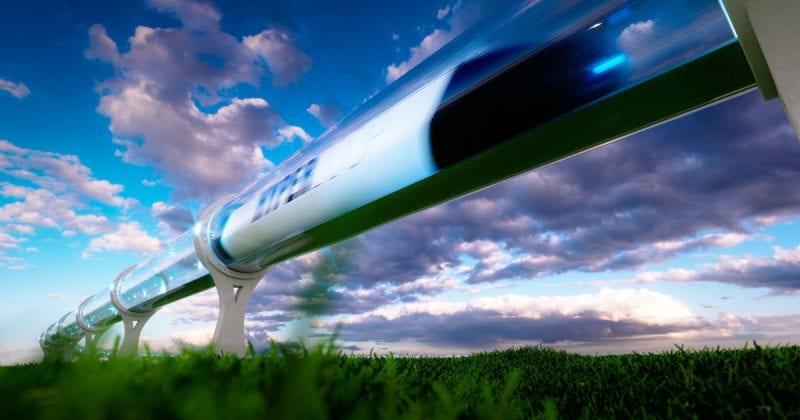 Forget roads. When it comes to the future of land logistics, think tubes.

In the not-so-distant future, goods could be transported in driverless pods through underground tunnels and tubes at high speed, following accurate timetables around the clock.

Fewer trucks will ply the roads, reducing traffic jams and minimizing disruption to daily life. Air pollution levels will be brought down significantly as the tube transportation will be powered by solar energy.

The idea that one could move people or goods at hundreds of kilometers an hour underground was once dismissed as a piece of science fiction. But today, that vision is coming into existence.

From hype to reality

American entrepreneur Elon Musk, the founder of SpaceX and Tesla, first came up with the idea of a vacuum and maglev-powered train — a new form of transportation — back in 2013.

In a 57-page document with detailed technical specifications, Musk said he wanted to create a new form of transportation that was safer, faster, cleaner and more convenient than any high-speed rail technology available in the market today.

He called this new idea The Hyperloop. Using a series of sealed tunnels, pods transporting people would speed through, with little friction or air resistance. These pods could potentially travel at speeds of 1,000 kilometers per hour.

“If we are to make a massive investment in a new transportation system, then the return should by right be equally massive,” he said, when he announced the project to the world.

Many analysts, at the time, said the technology would be decades in the making, dismissing it as nothing more than a hype.

But in 2017, members of the Delft University of Technology in the Netherlands made a significant breakthrough. They designed and built the ‘Delft Hyperloop’, a prototype pod that was able to move though pipelines at high speeds.

The Delft Hyperloop can reach speeds of over 1,200 km/h and can carry both passengers and freight. This means it could cover the 500-kilometer distance between Paris and Amsterdam in just under 30 minutes, compared with five hours by road.

What separates the technology from reality ultimately boils down to practicality from a cost-benefit perspective. To help the project team develop a viable business model, DHL supplied them with insights and reference values on energy use, and the effects of air and road transport on the environment based on the company’s existing data.

In many other parts of the world, scientists and engineers are similarly experimenting with the Hyperloop technology.

China is gearing up to construct its first Hyperloop tunnel in the province of Guizhou. The aim is to connect Tongren with Guiyang, the capital of Guizhou, which is about 250 miles away. Once completed, the system would shorten the transit time from a one-hour flight to 20 minutes, drastically improving the state of freight movement.

Companies such as Richard Branson’s Virgin and engineering conglomerate Aecom are also throwing their support and funds behind the Hyperloop.

From trucks to tubes

While the focus has so far been on transporting people, the Hyperloop is poised to be a huge boon for logistics.

Today, logistics remains heavily dependent on trucks and trains, which presents a massive opportunity should the Hyperloop technology become mainstream.

Goods transportation by road is a major source of traffic congestion and air pollution, and many cities are reaching their limits with road transport.

European road freight transport, for example, increased by 4.5 percent between 2015 and 2016. And this figure will continue to grow.

Current transport infrastructure alone — both road and rail — will be unable to absorb this growth, and this means that alternative systems must be explored. For cities and businesses alike, the tube system will not only guarantee the delivery of goods on time, but also meet growing market demands.

Already, several countries are serious about making the Hyperloop work for logistics, testing the idea in their own supply chain infrastructure.

By 2030, Switzerland plans to build a 70 kilometer-long tube which would link Härkingen and Niederbipp with the country’s biggest city, Zurich. Construction work is due to start in 2023 and it is estimated that the first phase of development will require an investment of some 3.5 billion Swiss francs (€3.08 billion).

Similar plans are under way in the United Arab Emirates. An average 4,000 vehicles traverse a road that links Dubai and Abu Dhabi every hour — a trip that that takes up to two hours. If the Hyperloop is successful, the trip between the two cities will be cut down significantly to just 12 minutes.

If all of these tests and trials prove successful, the once seemingly crazy idea mooted by Musk in 2013 will be more than just hype. The Hyperloop will transform logistics, and send it speeding into the future.

9 0
Thank you for leaving your feedback
Reuse this content
STORIES YOU MAY LIKE
Innovation
5G: Five things it means for logistics
The fifth generation of cellular internet connectivity is set to be the supercharged gateway to a smarter and more connected logistics world.
Insights
Road freight: Paving the way for a smooth ride
Transporting goods by road comes with its own set of challenges, but with the right measures in place, logistics providers can enjoy a smoother ride.
Insights
Don’t let electric cars shock your supply chain
Automakers are rising to the supply chain challenges posed by growing demand for electric vehicles.
Sustainability
Sustainable mobility: The road to cleaner transport
Industry heavyweights are leading the charge in sustainable mobility from electric trucks to alternatives for aviation fuel.
Innovation
These patents could usher logistics into the future
With innovation high on the agenda, key players are tapping technology to solve problems that have long plagued the industry.
Sustainability
5 reasons why hydrogen is the fuel of the future
With global warming and carbon emissions dominating headlines, countries are turning to hydrogen as a secure and clean alternative to fossil fuels.