Your default browser language is set to . Browse this site in another language:
English 日本語 简体中文 繁體中文（香港） 繁體中文（台灣）
Continue
All
Innovation
Insights
Sustainability
Resources
Currently reading
This Asian economy is emerging as a winner of the trade war 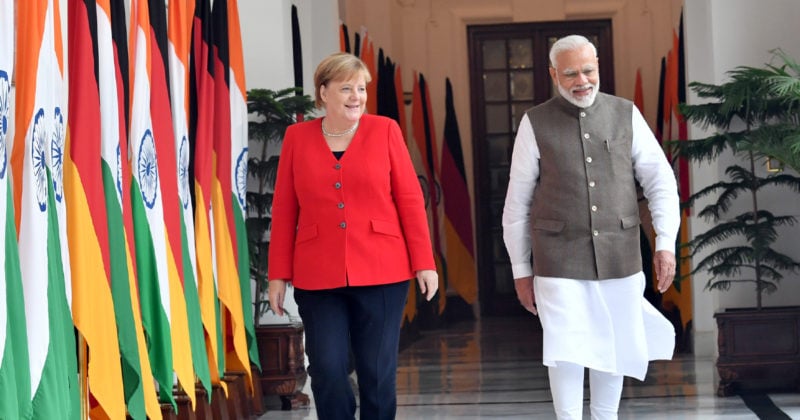 Read next
Can Germany and India become major trade partners?

Taiwan’s robust technology industry makes it important to both the United States and China. 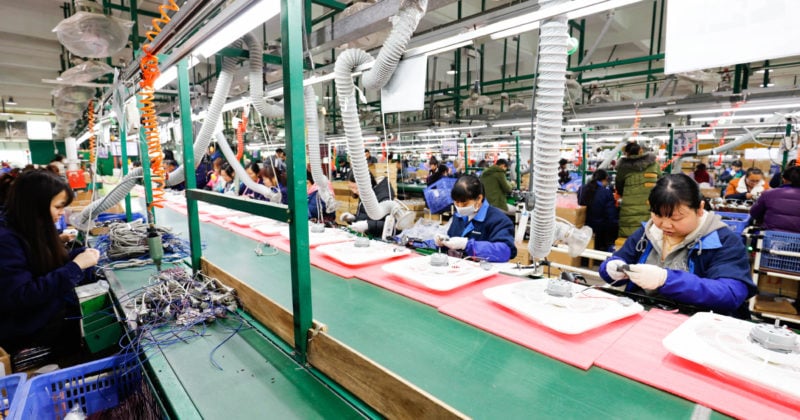 Pundits did not always see Taiwan as a beneficiary of the trade dispute between the United States (U.S.) and China. Some of them even named it a potential loser. “Trade war traps Taiwan between two superpowers,” said a 2018 headline.

But now, a United Nations report identifies Taiwan as the biggest beneficiary of trade diverted from China as a result of punitive American tariffs. Taiwan racked up additional exports to the U.S. worth nearly US$4.2 billion (€3.8 billion) in the first half of 2019, driven by the office machinery and communication equipment sectors, according to the report.

In retrospect, Taiwan’s gain is not unexpected. It is a major exporter of machinery and technology, including office appliance and communication equipment — the sectors worst hit by American tariffs. Information, communication, and audio-video products make up its second largest export.

Of late, exports have been fueling Taiwan’s economic growth. Its GDP expanded 2.91 percent year on year in the third quarter of 2019 despite slowing growth in Asia, mainly thanks to increased exports to the U.S.

Taiwan’s mature tech industry and supply chain have made it a preferred alternative not only by American companies but also by Chinese businesses. Taiwanese tech firms, for example, are benefiting from China’s ‘de-Americanization’ campaign after the U.S. government’s crackdown on Chinese tech companies.

Taiwan’s trade to the U.S. has also gained from a shift in production away from China, particularly in the capital machinery and electronics sectors.

Many Taiwanese companies in these sectors moved manufacturing capabilities to China in the late 1980s. But as the U.S.–China trade dispute intensified, some sought to move or diversify production to dodge American tariffs. And Taiwan was an obvious choice.

To lure more companies back, the Taiwanese government has offered incentives such as relaxed land use regulations and expanded tax breaks under its InvesTaiwan program.

“The lingering uncertainties in China–U.S. relations will continue to prompt Taiwanese manufacturers to diversify their supply chains.”

More than 150 companies have applied to the government program, and investment pledges have reached about NT$1.2 trillion (€35.5 billion) since the scheme kicked off in early 2019. Flat‑panel maker Innolux Corp, for example, has received approval to invest NT$70 billion under the program.

“We will see additional annual investments of NT$300 to NT$400 billion a year over the next two to three years thanks to the return of Taiwanese companies,” said Minister without Portfolio Kung Ming-hsin.

Of course, Taiwan still faces competition from overseas. DHL Resilience360, a supply chain risk management software, revealed in a survey that 11 percent of businesses with supply chain operations in China preferred to shift production to India and Vietnam, while 27 percent were not considering moving operations.

In addition, geopolitical tensions and other factors continue to weaken global trade. Indeed, DHL’s latest Global Trade Barometer has dropped steadily over the past seven months. The global index hit 45 in November 2019, indicating that global trade growth will continue to slow down. 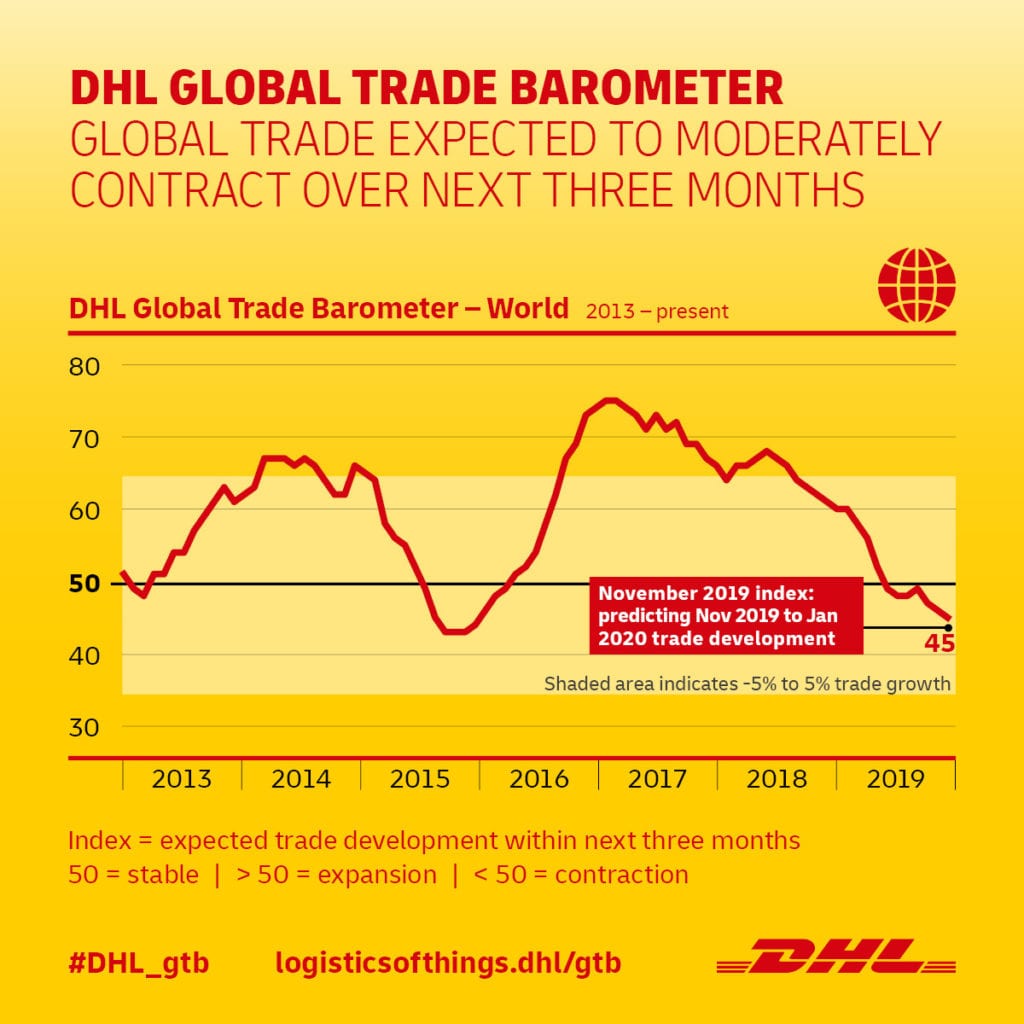 Taiwan is not immune to the effects of this slowdown. While it may have benefited from rising exports to the U.S., Taiwan faces lower demand for input materials from China, potentially offsetting its gains.

According to government data, exports to Mainland China and Hong Kong dropped 6.4 percent year on year in the first 10 months of 2019, contributing to a 2.4 percent decline in total exports. The two markets account for about 40 percent of Taiwanese exports, significantly more than the U.S.’ 14 percent share.

Still, economists keep a positive outlook for Taiwan. DBS Bank economist Ma Tieying expects the trend of investment repatriation and trade diversion to continue in 2020. The bank has revised its Taiwan GDP growth forecast for 2020 to 2 percent, up from 1.8 percent.

Despite reaching an agreement on an interim trade deal last December, China and the U.S. have tougher issues to resolve beyond tariffs.

“Regardless of a so-called Phase 1 trade deal between China and the U.S., the two countries’ conflicts on thorny issues like industry subsidies and cybersecurity will likely remain in place for years,” said Ma. “The lingering uncertainties in China–U.S. relations will continue to prompt Taiwanese manufacturers to diversify their supply chains.”

0 0
Thank you for leaving your feedback
Reuse this content
STORIES YOU MAY LIKE
Insights
Behind the U.S.’ trade dispute with another Asian giant
After China, the United States has doubled down on a trade war with another of its top trading partners: India.
Insights
World’s largest trade deal: Who are the winners and losers?
Not all members of the Regional Comprehensive Economic Partnership will get an equal share of the pie.
Insights
Winners and losers of the U.S.-China phase one trade deal
A pause in the trade conflict between the U.S. and China brings both good and bad news.
Insights
ASEAN–China trade surges, but for how long?
Growing trade signals shifting dynamics between China and the Association of Southeast Asian Nations (ASEAN).
Insights
Trade war accelerates shift of production from China
Countries in Southeast Asia have emerged as alternative manufacturing hubs to China as companies seek to avoid hefty U.S. tariffs.
Insights
5 sectors feeling the brunt of the U.S.–China trade conflict
As trade friction between the world’s two most powerful economies persists, how are key sectors bearing up?